Posted on by Posted in NBA News

Those Washington Wizards fans who stayed up for this late night game vs the Portland Trailblazers surely feel like this one was worth it. In fact, the way the Wizards are playing lately, they almost seem like a must watch team.

In a game that went back and forth and had the makings of a typical let down, including Damian Lillard and Wesley Matthews raining 3s to get Portland back in it, the Wizards kept fighting to maintain their lead behind a strong 4th quarter from Jordan Crawford. 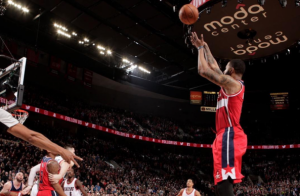 After Wesley Matthews hit a three to tie it up, and Portland gave their foul to give, the Wizards called timeout with 3.7 seconds to go. The Portland announcers couldnt decide whether it was going to be Trevor Ariza, Martell Webster, or Jordan Crawford who would be taking the shot.

Washington put the ball in Jordan Crawfords hand and he launched a high arching three at the buzzer:

His Steez was phenomenal, as JC challenged his inner Gilbert Arenas and started heading up court before the ball even made it through the hoop. He was met by a mob of Wizards players at the other end who celebrated by playing Smear The Steez.

Dont look now, but Washington has won 5 of their last 7.